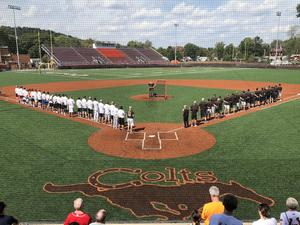 The bases were loaded, and the dugout box was full on September 28, 2019, as 64 former DeSales High School baseball players and three former coaches returned to campus for an inaugural alumni baseball game.

"We were so pleased to have Coach Minogue, Coach Mac, and Coach Cataldo back on the field," said Tim Sievert '88, DeSales High School head baseball coach. "We had so many participants that we scheduled two baseball games!" he continued.

After the game, the players enjoyed refreshments, burgers and hot dogs cooked up by Jerry Murphy '71. DeSales would like to thank the individuals who planned the event and the alumni who attended.