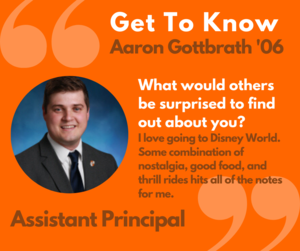 When Mr. Aaron Gottbrath started at DeSales in 2011, he wasn’t a stranger to the school. As a 2006 graduate of DeSales, he had roamed the halls interacting with some of the same teachers he was now working with. But, his time at DeSales goes beyond just his time here since he had a brother and father graduate from DeSales.


Mr. Gottbrath started his career at DeSales as an English teacher and later transitioned to become the assistant principal. “I really like interacting with the students. Talking in the hallway between classes and during workshops still lets me get to know students on a personal level,” said Mr. Gottbrath.


What do you think has been the most positive change/impact since your time at DeSales, and why?

The updates to the facilities really stand out. The stadium is great, but the hallways, ceilings, and bathrooms have transformed the look of the whole building.  It felt like it was built in the ‘50s when I was a student.


What do you see DeSales doing in the future to make an impact on students and/or the community?

I think we live our mission daily.  We are teaching students to be moral, ethical, and responsible leaders in the community through our partnerships, extracurriculars, curriculum, immersion, sports programs, etc.  We are raising well-rounded men.


Why should alumni and friends support DeSales?

Our kids are capable of leaving the world better than they found it.


What have you learned from the students?

I have learned to avoid assumptions.


What is your proudest moment at DeSales?

Winning two districts as the soccer coach and watching the football team win back-to-back state titles was awesome.  But I think I have to go with graduation. It’s a real honor to walk the graduates over to the Iroquois Amphitheater before the ceremony.


What is your motto or personal mantra?


What is your biggest achievement to date?

Getting this job. When the principal suggested I go back and get my principalship, I told her thanks, but no thanks.  She came back again three months later, and I did. The assistant principal job came open the next year.


What is your hidden talent?

Sarcasm. Maybe not so hidden.


If you could switch roles with anyone at DeSales, who would it be and why?

I would switch roles with Jerry Murphy or Roy Holladay. They can just do it all, and they’ve seen so much. Also, Terry Barney because he wears sweatpants every day.


What would others be surprised to find out about you?

I love going to Disney World.  Some combination of nostalgia, good food, and thrill rides hits all of the notes for me.


How do you spend your summer?

I don’t get summers off, so I am mostly scheduling students for the next year.


If you could take the students on a field trip anywhere in the world, where would you take them?  I would go back to Germany. We went in 2014, and it was amazing. If I could add one thing to that trip, I’d want to go hiking in the Black Forest.


How do you think the students will remember you and your class?

Hopefully, students remember me as a combo of funny, relatable, and supportive. I’m trying to find the balance between nurturing and holding them accountable.


How do you show school spirit?

I scream at sporting events, often in a highly embarrassing fashion.