Get To Know Josh Rinkel '09 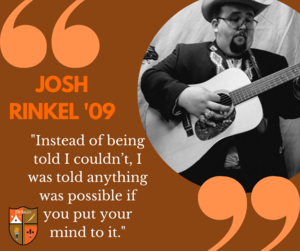 What did you do right after graduation?

Right after graduation, I went on the road picking up gigs anywhere I could for the summer. I was working with a band full time on the road and playing other shows on the side with bands that needed a fill-in banjo player.

Where are you and what are you doing now?

I’m living in Shepherdsville, KY, but I split my time between Shepherdsville, Nashville, and Gatlinburg, TN. I’m the guitar player in a band called The Po’ Ramblin’ Boys. We play about 200-250 dates a year on the road and at Ole Smoky Moonshine in Gatlinburg. In the past two years, we were fortunate enough to have signed to a pretty good record label, Rounder Records, won an IBMA (International Bluegrass Music Association) Award for 2018 Emerging Artist of the Year, along with a handful of other nominations. On October 1, we made our Grand Ole Opry debut. The band was also nominated for Best Bluegrass Album of the Year at the 62nd Grammy Awards in Los Angeles this past January. Since graduation, back in 2009, I’ve been lucky enough to travel the world doing what I love to do. My music career has taken me to 46 states, and 9 countries.

What do you like most about what you are doing?

I get to travel to places I never thought I’d see. I love seeing new places and gaining new experiences and seeing how other people in the world live their lives. I’m doing what I love to do, with a group of people that are my best friends. It’s as close to living out a dream as I can get!

What is your favorite memory about DeSales?

My favorite memory about DeSales was my immersion trip to New York City. That trip was the first time I’d really traveled outside of the region I was used to (KY and surrounding states). I think that trip is what really sparked my love for traveling and experiencing different cultures.

Who influenced you most during your time at DeSales?

This is definitely a question that can’t be pointed at one person alone. Every teacher I had played a crucial part in shaping what I took away from my four years at DeSales. A few names that stick out in my memory are Coach Mac, Ms. Powers, Mr. Night, Mr. Strothman, and Ms. Bartlet.

What is the most important thing you learned while you were at DeSales?

Most people looked at me like I had two heads when I told them I wanted to play bluegrass music for a living - not at DeSales though. Not one single person tried to talk me out of chasing my dream. Instead of being told I couldn’t, I was told anything was possible if you put your mind to it.

I was given a list of resources by teachers that included colleges with music programs that focused specifically on roots music and bluegrass music. I was given the encouragement I needed to make a career out of what I love to do. I was even encouraged to try out for American Idol the year they came to Louisville by Mr. Strothman and Ms. Powers...... I didn’t..... but I at least should have.

The most important thing I learned while at DeSales is that it's okay to want to be an artist, or a musician, or something out of the ordinary of what’s considered a “normal” career. If you know a young person that has a passion for something, support and encouragement is what they need to be successful.

What advice do you have for current (or potential) students at DeSales?

Take it all in. Make the most of your time at DeSales. Gain every experience you can and take away the absolute most you can from being there. You won’t regret it!

What do you like to do in your free time?

I love the outdoors and cooking. I spend a lot of my time off hunting, fishing, canoeing, learning new ways to cook wild game, and restoring vintage cast iron skillets.

Do you still stay in touch with any of your DeSales friends?

There are a few guys I stay in touch with on social media. I’m not home very often so seeing old friends has unfortunately been put on the back burner, but I’d definitely like to get more involved with the alumni association and make some connections in the future.

What’s next for you/where do you see yourself in five years?

I’m hoping my music career stays on a steady uphill climb. This is what I love to do and what I want to do for the rest of my life.