Get To Know Ryan Hunton '05 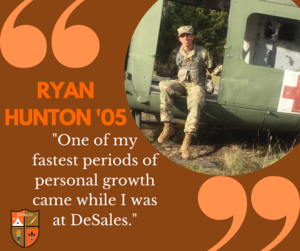 What did you do right after graduation?

I spent that summer hanging out with my crew - Jimmy Burns, Chris Kent, Chris Payne, Justin Lewis, Alex Jones, Catherine Baines, Mary Luke Noonan, Lori Crosthwait, and Erin Stevens. I moved to Bowling Green that fall and went to Western Kentucky University for undergrad. Eventually, I earned a Bachelor of Arts in Journalism, Literature, and Philosophy, and earned a Bachelor of Science in Chemistry and Health Sciences. While at WKU. I also joined the Kentucky Army National Guard and became a commissioned officer through WKU ROTC when I graduated. I served as an officer in the Medical Service Corps while I went to the University of Kentucky for graduate school. I earned a Master of Science in Physician Assistant Studies. I currently serve as a physician assistant at Frankfort Regional Medical Center and in the 1163rd Medical Company.

Where are you and what are you doing now?

What do you like most about what you are doing?

I like to help people and serve. When people come to the emergency department, I like being able to think through and investigate what might be causing their problem. My job involves problem-solving, decision-making, procedures, and human interaction. In the National Guard, I like being able to train and teach medics in preparation for medical missions. I have grown a lot as a leader and communicator through the National Guard.

What is your favorite memory about DeSales?

My favorite memory is playing tennis on Coach Burke's teams and running cross-country on Coach Wise's teams. We had a lot of good times and we won a lot of matches and races. Senior retreat at Mount Saint Francis was also memorable. At the retreat, I learned a lot about my classmates, teachers, and myself. Afterward, I felt more prepared for my next stage in life.

Who influenced you most during your time at DeSales?

Coach Burke and Senorita Trigg. Both were incredibly positive and made me believe I could do things that I didn't think I could do. Their encouragement helped my confidence and self-esteem as a student and athlete.

What classes and learning experiences did you have at DeSales that are beneficial to the work you do?

The service and leadership experiences at DeSales stand out. I think these experiences helped define who I am and who I wanted to become. Of course, learning to play the harmonica during immersion week also made a big difference.

What is the most important thing you learned while you were at DeSales?

I learned that I am capable of succeeding and creating my future. One of my fastest periods of personal growth came while I was at DeSales.

What advice do you have for current (or potential) students at DeSales?

What do you like to do in your free time?

I like playing tennis, running, hiking, working out, watching baseball, reading, and writing.

Do you still stay in touch with any of your DeSales friends?

I do, but it's been a while since I've seen many of them.

What’s next for you/where do you see yourself in five years?