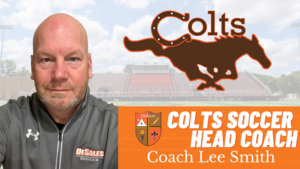 Former Assistant Coach, Lee Smith, will lead the Colts in the 2021 season.

DeSales Athletics is excited to announce that former DeSales assistant soccer coach, Lee Smith, has been named head coach of the DeSales Soccer Team. Coach Smith has been coaching in the program for three years and is excited to take the next step in leadership.


“I endeavor to push my student athletes to raise their expectations. Expectations of the program, the level of play, level of competition, level of what they can expect from the staff and most importantly what’s expected of them and ultimately the level of success we are capable of,” said Smith.


Coach Smith has been a part of the Louisville soccer community for more than 15 years, having coached in various capacities at the LSA (Louisville Soccer Alliance), Mockingbird Sports Complex, and the YMCA.


“The thing I’m probably most excited about is continuing to work with the guys I’ve been able to build relationships with over the past several years and continue working to implement a style of play that will hopefully allow us to maximize our strengths and compete at a high level,” said Smith.


When asked why students should choose DeSales, Coach Smith said, “It’s a great environment offering lots of opportunities both academically and athletically. I believe they will be challenged to reach their full potential, not only as students, but as players in a program that pushes them to realize their best on the field too. Both my boys attended DeSales and flourished in the classroom as well as the soccer pitch, and I know that experience is available for others who want to work hard and take advantage of what DeSales has to offer.”