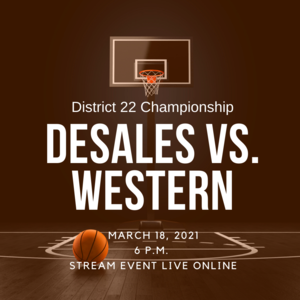 The DeSales Basketball Team is in it to win it! After starting the season off in January, the team has racked win after win including against St. Xavier High School (twice!), Male High School, Christian Academy, Owensboro Catholic, Fern Creek High School, and Ballard High School. The current record is 17-6.

Led by head coach Damien Anderson, who was named the Courier-Journal 6th Region Coach of the Year, the Colts won the 2021 Republic Bank Louisville Invitational Championship, the first in school history.

It takes a team to win, but several Colts have been recognized for their play this year including Devin Perry as the 6th Region Player of the Year. Devin was also named to the All-Tournament Team along with Keith Robinson. Sekou Kalle was named the LIT Most Valuable Player.