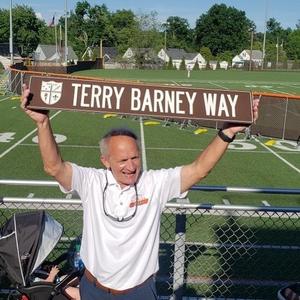 After 35+ years of teaching, administrating, coaching, & mentoring the young men of DeSales High School, Coach Terry Barney has officially retired. Coach Barney has played a major role in impacting the lives of thousands of DeSales graduates through the decades, as well as being a positive force in leading the school into the future.
To honor his work and dedication, the DeSales Board of Directors & Leadership Team have officially named the school's front-drive leading to the Fr. Bart Larkin Chapel & Paul B. Cox Stadium, Terry Barney Way. Coach Barney's namesake street is directly connected to another legendary Colt's street honor - honorary alumnus, Tim Burke Way.
We congratulate Coach Barney on his retirement, as he prepares to spend many hours with his new grandson, George. Thank you for your dedication, Coach. Hidy Hidy!