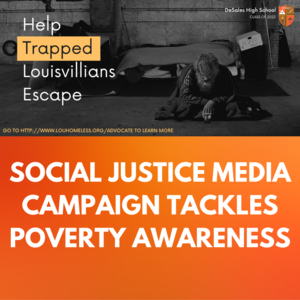 “How can we raise awareness of poverty among our peers in the United States?” The Class of 2022 social justice class at DeSales High School led by Mrs. Kari Ogle wanted to answer that evergreen question.

At a time when poverty is steadily increasing in Jefferson County, the students of DeSales took the question to task and came up with a public campaign that was implemented with the donation of media space from Maloney Outdoor Advertising.

At the end of the 2020-2021 school year, DeSales High School students worked in groups to brainstorm possible solutions to increase awareness of poverty trends in the community including reviewing Jefferson County’s statistics to those of larger cities such as Chicago and New York. Surprised to learn that we are on par with the poverty rates of these metropolises, students knew something had to be done.

A group of three DeSales juniors, Trevor U’Sellis, president of the DeSales student government, Beau Clark, and Alex Grasmick worked on a billboard design that incorporated the Coalition for the Homeless. Featured on the billboard is the website for the organization along with the DeSales crest and “Class of 2022.”

Understanding that poverty is a trap that is difficult to escape, the students used that word on the billboard to succinctly communicate their message along with a stunning black and white photograph that shows the reality of homelessness.

"First off, I think that the idea (a billboard) is much more dynamic than doing a coat drive and/or food drive. So give your class some kudos. The question and message of helping the trapped out of poverty are really good. Poverty is the common variable for people that are homeless or housing insecure rather than severe mental illness or substance use disorder," said George Eklund, director of education and advocacy at the Coalition for the Homeless.

The billboard may be seen at the Muhammed Ali and Sixth Street intersection. Visit Coalition for the Homeless to learn more about how you can help.