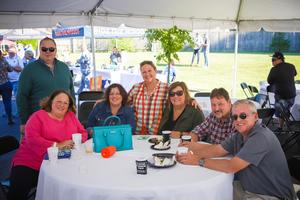 The weather was beautiful, the company was great, and the music was groovin. DeSales High School started its 65th anniversary celebration with the first annual Day on the Grounds. More than 300 people were in attendance to enjoy local food, brews, wine, and bourbon from more than 30 vendors.
Friends were able to reconnect and meet up at this outdoor event while enjoying a laid back atmosphere. The Class of 2001, 2010, and 2011 hosted their reunion at the event and were able to catch up on where life has taken them since graduating from DeSales.
Sout Circus played the best funky tunes throughout the event, and a few people even danced. Fun was had by all as we enjoyed the outdoor weather and company of friends.
Thank you to the Event's Vendors!