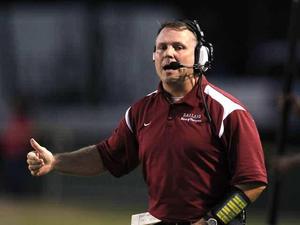 DeSales High School is proud to announce Mr. Mike Jackson as the head football coach to the Louisville, KY tradition-rich athletics program. Coach Jackson was named the Kentucky Coach of the Year 4A in two consecutive years, while at Oldham County High School. In the last 28 years, Coach Jackson has achieved what few coaches do including several state finals appearances, one state championship, numerous district and regional championships, eight District Head Coach of the Year awards, and a 66% winning percentage as a head coach or coordinator.


Coach Jackson most recently served as the offensive coordinator and strength coordinator at Male High School, where his team achieved 6A state runner-up status in 2019 and 2020. In this role, he coached a #1 ranked team in all classes for an undefeated year.


Previously Coach Jackson served as the head varsity coach at Seneca High School and the assistant varsity football coach at Trinity High School. At Trinity, Coach Jackson contributed to a 15-0 record, a state championship, and a national top-10 ranking.


“I look forward to leading a program that has both a history of statewide competitiveness and a high level of commitment to an all-around excellence,” said Coach Mike Jackson.


As a student-athlete at Centre College, Jackson lettered in football, tennis and track. With football in his blood, he began coaching at Centre College before transitioning to high school athletics. As a head coach at top-5 programs in the 6A and 1A levels, his skills were honed on how to bring out the best in students on the field and off. As a long-time educator, he has spent 18 years in the classroom and was named Teacher of the Year twice at his school. In his role at DeSales, Coach Jackson will continue to help students prepare for the future as the school’s student-athlete advocate by focusing on student college readiness, including ACT preparation and NCAA clearinghouse guidance.


‘I cannot be more excited to welcome Mike as our next head football coach at DeSales. Bringing his excitement and experience to our program will be a great asset to our student-athletes,” Don Bowers ‘81, DeSales High School athletic director.


We invite future Colts at the DeSales Open House on Sunday, November 21 from 12-4 p.m. to meet Coach Jackson. We welcome Coach Mike Jackson to the DeSales High School Brotherhood!